When an electric field is applied to an atom the electrons will be displaced from their orbit The electron then re-emits its own electric field. Because the electron has mass it has inertia and it takes time to move . This means there is a lag between the applied field and the emitted field. If the E field is oscillating then the field emitted by the electron has a phase lag due to this time lag. The result is the material appears to slow down the propagation of an oscillating EM field. This reduction in speed is described by the refractive index n = sqrt(ε) = c/v.

If the frequency of the applied E field is same as the electrons orbit frequency then resonance occurs The electron will be ejected and the atom will become ionised. At resonance a large amount of energy from the incident EM field is absorbed. The resonance frequency for electrons occurs in the UV

absorption of light as it passes through a material

ECG waveform is comprised of: The P wave, the QRS complex and the T wave. 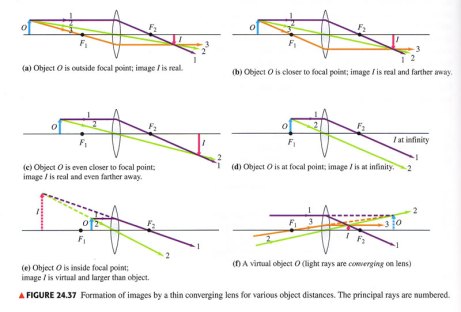 Light is split into two beams, one goes down a reference arm while one reflects off the sample. The beams are then interfered. Contrast results from the differences in optical path length.